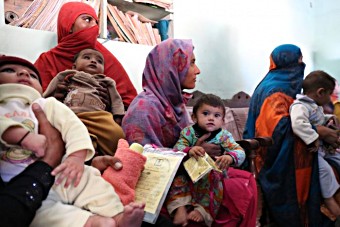 Mothers waiting to get their children immunised at a vaccination site in an area of Lahore with limited access to health services
Credit:Gavi/2016/Isaac Griberg

Islamabad, 9 March 2016 – Pakistan is making progress in improving its childhood immunisation programme, but sustained commitment at federal and provincial level is required to increase the coverage of services and reach children who today miss out on life-saving vaccines.

More than 1,000 Pakistani children under the age of five die every day, many of them from diseases that could have been prevented by vaccines. According to WHO and UNICEF estimates, Pakistan’s coverage rate with one of the most basic vaccines (DTP3) stood at 73% in 2014 with large variations between the provinces, districts and communities. The most recent Pakistan Demographic Health Survey, from 2013, showed Punjab had 76% coverage while in Baluchistan the figure was just 27%.

This week, a high level mission to Pakistan was led by Anuradha Gupta, Deputy CEO of Gavi, the Vaccine Alliance, together with the Bill & Melinda Gates Foundation, the UK’s Department for International Development, USAID, the Norwegian Agency for Development and Cooperation, UNICEF and WHO. The visit was a follow up to a similar mission conducted in February 2015. The delegation visited Islamabad, Lahore and Karachi to see the progress made in the last 12 months, understand the challenges that lie ahead, and encourage leaders to reinforce their commitment to end childhood vaccine preventable deaths.

“I have been deeply encouraged by much of what I have seen during this visit,” said Ms Gupta. “Coordination at federal and provincial level has clearly improved and I have seen for myself some of the innovative work at local level to reach children with vaccines. This week’s approval of the budget for the new provincial plans, which will kick-start the National Immunisation Support Project, is welcome news as it paves the way for intensified action on routine immunisation. Timely release of funding at all levels will be a critical next step.”

Among the initiatives witnessed by the mission was a recently-expanded approach using mobile phone technology and real-time data to monitor vaccinators, identify children missing out on vaccinations, and strengthen accountability. In Punjab this has significantly increased immunisation coverage. Similar approaches are now being initiated in KP and Sindh.

“Accurate and timely information is absolutely vital to ensuring we are reaching children with vaccines,” said Dr Michel Thieren, WHO Representative in Pakistan. “We need to see successful initiatives taken to scale so they can benefit children across Pakistan.”

The delegation also welcomed the decision by the Chief Minister of Sindh, Dr Qaim Ali Shah, to better support the immunisation efforts of vaccinators and Lady Health Workers by including operational costs in the province’s recurrent budget. This decision will help Sindh to reach more of its children with vital vaccines.

“All Pakistani children should have access to life-saving vaccines, no matter where they live,” said Angela Kearney, the UNICEF Representative in Pakistan. “We simply must not accept that a child misses out on immunisation because they were born in a remote area or an urban slum. The provision of health services, including immunisation, is a fundamental building block for provinces across Pakistan.”

Gavi has committed US$ 1 billion towards immunisation in Pakistan between 2001 and 2019, making the country the largest recipient of Vaccine Alliance funding. Through this support, Gavi is helping Pakistan to reach its children with the five-in-one pentavalent vaccine – which protects children against diphtheria, tetanus and pertussis as well as Haemophilus influenzae type b and hepatitis B – and pneumococcal vaccine, which protects children against the leading cause of pneumonia, the world’s leading vaccine-preventable cause of death in children.

Gavi also provides support to the country for measles campaigns and inactivated polio vaccine (IPV), which is crucial to global efforts to eradicate polio. Pakistan is currently preparing an application to Gavi for the introduction of rotavirus vaccine, which is a significant step to protect children from dying of diarrhoea.