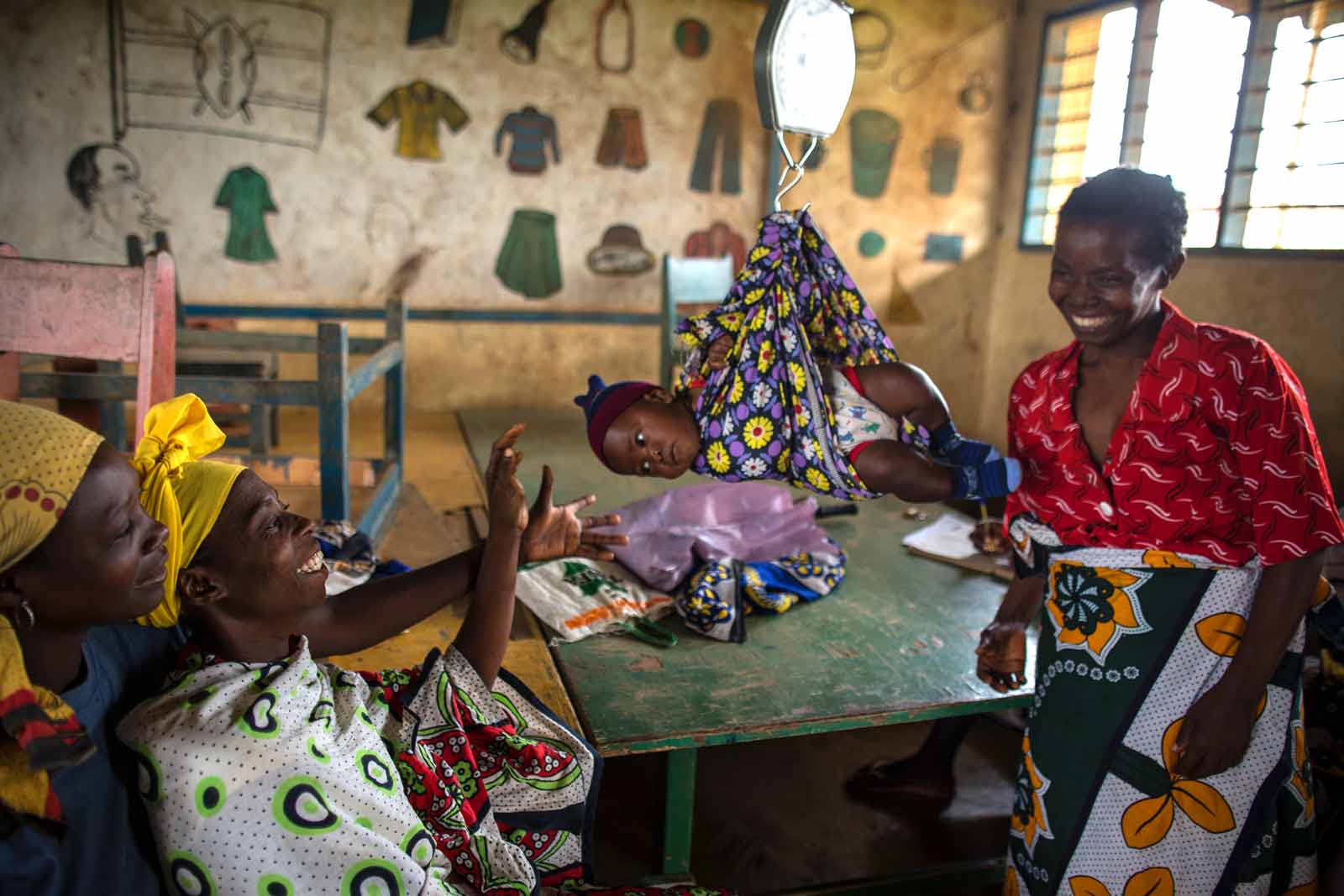 A research study on the impact of pneumococcal vaccine in Kenya shows data-mining electronic medical records is vital to transforming health care.

A research study on the impact of pneumococcal vaccine in Kenya shows data-mining electronic medical records is vital to transforming health care.

Early one cloudless morning, Oscar Kai was perched on a Yamaha motorcycle clutching his laptop to his chest as he bumped along a dirt road past groves of coconut palms and fields of corn.

He was on his way to a makeshift clinic deep in the Kenyan countryside that is one of 33 taking part in a unique digital study here mapping the success of a new vaccine to help beat childhood illnesses.

A 20-minute ride later – a distance that would take a woman carrying her baby on foot more than two hours – Mr Kai, 28, set up his laptop on a desk in one of three tin-roofed classrooms at Ngamani Primary School.

Mothers in colourful shawls with babies on their backs began arriving. In their hands, each held a purple A5-sized booklet that, until this new survey, was the main way to document their medical records and those of the children.

Now that is changing, thanks to Mr Kai and his colleagues on the pneumococcal conjugate vaccine impact study (PCVIS), which is creating a medical digital database of 270,000 people in Kilifi district on Kenya’s Indian Ocean coast.

Now seated behind the teacher’s desk at Ngamani, Mr Kai was speaking to Kadzo Chai, 28, whose still-screaming three-month-old daughter Nuru had just been given a second dose of PCV.

Alongside a note of when and where Nuru received that vaccine, her height and weight were updated, and details added of pentavalent, BCG, polio, yellow fever, measles, diphtheria, tetanus and hepatitis B immunisations.

Later, these records and those of everyone seen at the clinic that morning will be uploaded to a hard-drive and sent to the Kenya Medical Research Institute (KEMRI) in Kilifi town which, with The Wellcome Trust, is running the study.

“Because the database is digitised, it means it’s far easier to keep our records fresh, even if children move and access health services in different locations,” says Dr Benjamin Tsofa, the Kenyan health ministry’s chief liaison on the study.

“It helps us prioritise staff and resource allocation, and track not just PCV but all vaccines and most health interventions for children in our district.”

Separately, the study also tracks pneumococcal disease by monitoring hospital admissions, and it records the prevalence of nasopharyngeal carriage of pneumococcus bacteria with random swab samples of children and adults.

The day after Mr Kai’s outreach clinic, another of his colleagues was also out bumping along dirt tracks on an off-road motorcycle.

This is the crucial other side of the impact study: gathering evidence of whether the vaccine is in fact contributing to a drop in pneumococcal disease.

More than 16,000 Kenyans died after pneumococcal infections in 2000, the World Health Organization estimated in 2008; the disease caused 235,000 episodes of pneumonia in the country in the same year.

Later in the afternoon, Mr Mangi returned the samples to the study’s HQ in Kilifi, where Jane Jomo, a lab technologist, transferred them to petri dishes to be incubated overnight to see if bacteria are present.

Across from Miss Jomo’s workbench, another colleague was preparing blood culture samples taken from children admitted to the wards at Kilifi District Hospital.

They are testing for streptococcus pneumonia, Haemophilus influenzae type b and staphylococcus aureus, and their results will all be logged in the study database.

"Already, here in Kilifi, the incidence of the illness in children aged five has gone down by approximately two-thirds since the PCV vaccine was introduced in January 2011," says KEMRI’s Anthony Scott.

Doctors and research scientists are however wary of coming to significant conclusions because the study is as yet less than 30 months old.

Give us the evidence

“It is extremely important that we are actually able to measure the impact of the vaccine,” says Dr Juliet Otieno, a paediatric medical officer at Kilifi District Hospital.

“As a clinician, my assumption would be that if we have brought in the vaccine and we see a reduction in cases, then the vaccine is working. But that’s an assumption. The study gives us the evidence.”

I really like interacting with people, and learning about different cultures and the different ways that people live.

Coverage reasonably equitable with respect to income and urban versus rural areas; deaths among children under five declining gradually.

Per-capita spending on health below the regional average; problems with vaccine distribution.

Early results from a research study on pneumococcal vaccine in Kilifi show that since the vaccine’s introduction in January 2011, the incidence of invasive pneumococcal disease in children under five years of age has decreased by approximately two-thirds. Kenyan authorities are capitalising on the data captured by the study to improve Kilifi’s health care delivery overall. 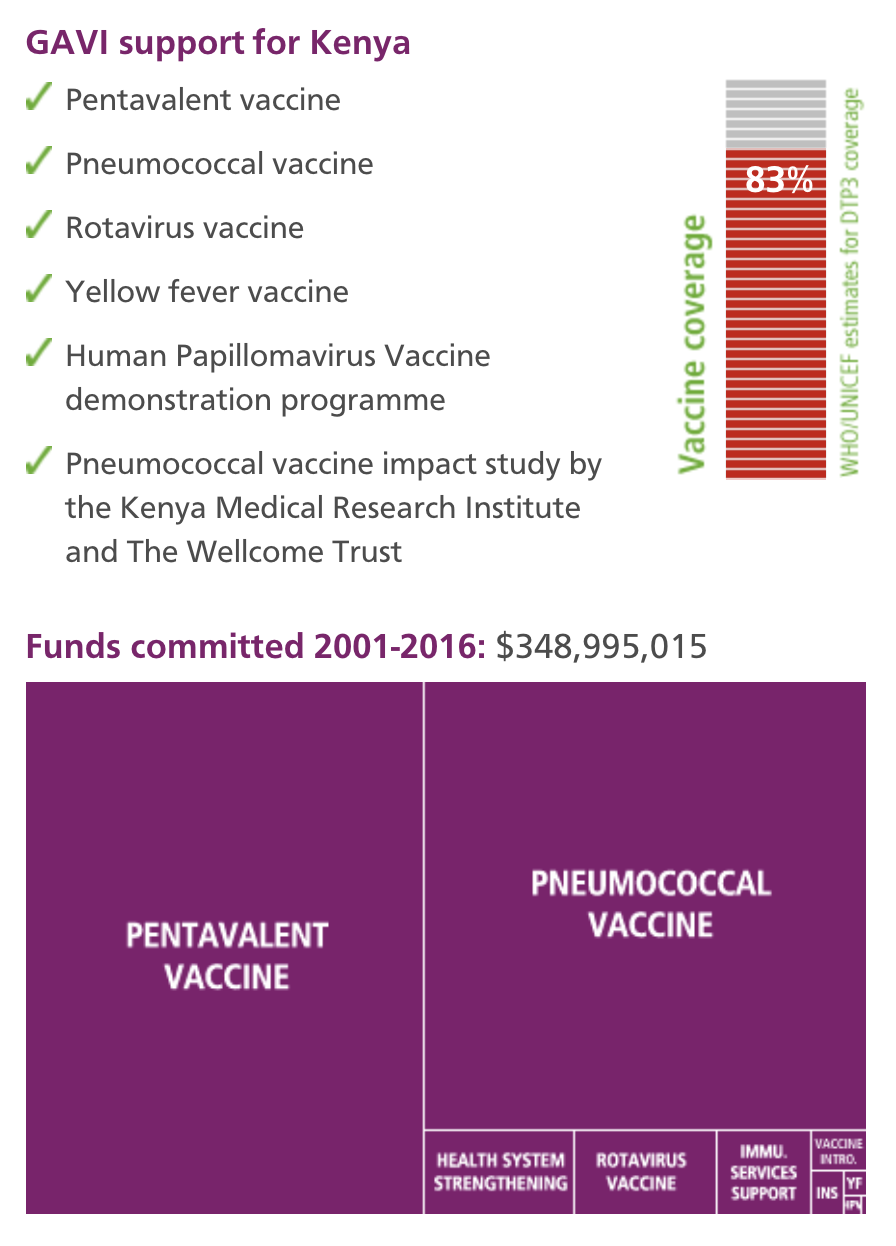 Coverage reasonably equitable with respect to income and urban versus rural areas; deaths among children under five declining gradually.

Per-capita spending on health below the regional average; problems with vaccine distribution.

Early results from a research study on pneumococcal vaccine in Kilifi show that since the vaccine’s introduction in January 2011, the incidence of invasive pneumococcal disease in children under five years of age has decreased by approximately two-thirds. Kenyan authorities are capitalising on the data captured by the study to improve Kilifi’s health care delivery overall.

Dr S.K. Sharif, Kenya’s Director of Public Health and Sanitation talks about beating vaccine-preventable diseases, why his country was the first in Africa to receive GAVI support for human papillomavirus (HPV) vaccine demonstration programmes and the importance of support from the GAVI Alliance.

Q How would you characterise Kenya's capacity to treat immunisable diseases, if there were no vaccinations against them?

Dr Sharif: if there were no vaccines against immunisable diseases, the system would have collapsed. In the 1980s, when the measles vaccine was not available or had low coverage, paediatric wards were full of measles cases. I remember the paediatric observation ward at Kenyatta Hospital [Kenya’s national referral hospital] was full of measles and diarrhoea cases. Children were sharing cots and I was spending most of my time giving penicillin and intravenous fluids. There was at least one child dying during the night.

Q Following from that, how important therefore is expanding vaccination coverage, in terms of both health status and resource constraints?

Dr Sharif: it is the most cost-effective intervention in medicine, and it is also the most effective. Vaccines are the most important discovery in medicine, in my view, even more important than the discovery of antibiotics. It is a priority for a country to invest in vaccines, to improve vaccination coverage and to introduce new vaccines. We must spend our money wisely and ensure that we are constantly investing in these programmes.

Q Kenya is the first country in Africa to carry out a demonstration project for the new HPV vaccine. Why was Kenya chosen?

Dr Sharif: I would call it a phased approach to nationwide roll out of a vaccine. We were chosen because we are known to be serious about vaccinations. I remember that our former health minister, Beth Mugo, was very passionate about cancers. She was asking us all how we can avoid people getting cancers, and we said that at least for cervical cancer there’s a vaccine, and she was immediately keen for it to come here.

It’s also fair to say that we have good experience introducing other new vaccines, especially the pneumococcal vaccine. There, the president was extremely enthusiastic about it, I think because pneumococcal was one of the top three killers of children.

Q Why are such data and impact studies important?

Dr Sharif: when you are asked to justify the introduction of vaccines, the thing they are always asking us is, “What impact is it going to have?” For the pneumococcal vaccine, it was easy. We had studies before and after the introduction of the vaccine, which showed first the true burden of pneumococcal disease, and then that there was a 70 percent reduction in admissions due to the disease after the vaccine was introduced. For the HPV vaccine, we are trying to follow up with the supplier and others to carry out a similar study on cancer of the cervix: is it going up, is it going down?

Once you have scientific evidence, Kenyans are very vaccine conscious people, and they will go for it. At the same time, with good data, it is very easy to show the minister and the country’s leaders the importance of bringing a new vaccine to Kenya.

Q How has GAVI helped?

Dr Sharif: the clear advantage of having GAVI is that the new vaccines are affordable to Kenya now, otherwise we would have to wait for at least 20 years before we could buy the vaccines. For pneumococcal, HPV, pentavalent, with the GAVI subsidy and its advance market commitment, we can easily get all these vaccines at an affordable price. For the HPV vaccine, for example, GAVI has managed to negotiate a much lower price for each dose from the manufacturer.

One thing I would say is that GAVI tends to be a rather theoretical organisation, it does not yet look at country-specific issues, so it becomes a little bit of a problem for them to understand the Kenyan context. But then again I must say GAVI has been in existence for a relatively short time compared to some other international agencies, and it is learning and it is adapting.

Q What are Kenya's priorities for vaccinations over the next decade?

Dr Sharif: already in Kenya we have a lot of things that other countries are still waiting to have. We have good infrastructure, we have a new vaccine store, our cold chains are functional throughout the country. These things are not major problems for us. Now our aim is to expand coverage of all existing vaccines, to meet our target of 95 percent coverage. At the same time, we are looking to introduce new vaccines, rotavirus, rubella, even malaria if an effective vaccine becomes available.