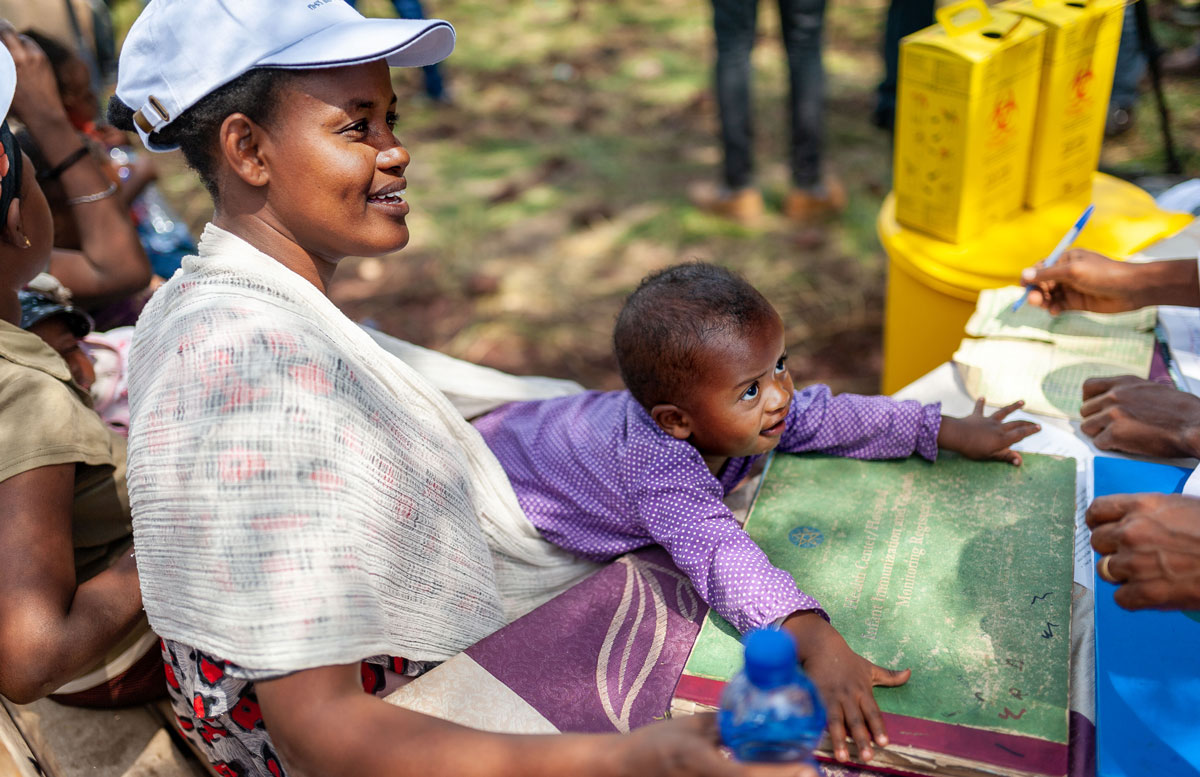 London, 5 February 2020 – Gavi, the Vaccine Alliance will help vaccinate up to 45 million children in seven developing countries over the next six months in a series of major vaccination campaigns to help halt a recent surge in global measles cases.

The campaigns will be carried out by governments with funding from Gavi and support from Vaccine Alliance and Measles & Rubella Initiative (M&RI) partners, including World Health Organization (WHO) and UNICEF. They will target children under five years old, the age group most vulnerable to the disease, with Bangladesh also aiming to reach children under nine years old.

In addition Gavi, with support from Vaccine Alliance partners, will help Madagascar and Mauritania introduce a second dose of measles-containing vaccine into their routine immunisation programmes. Over a million children every year in the two countries will receive this vital second dose, which increases the vaccine’s effectiveness from around 84% to 97%.

Reported measles cases worldwide fell from over 850,000 in 2000 to 132,000 in 2016, largely as a result of increases in vaccine coverage in the world’s poorest countries. However, in recent years cases have surged dramatically. In 2018 there were nearly 360,000 cases recorded globally. Provisional data reported to WHO shows this climbed again in 2019, with almost 430,000 cases reported for the year to date.

“The measles vaccine is safe, effective and low-cost – there is no reason children should still be dying of this disease,” said Dr Seth Berkley, CEO of Gavi, the Vaccine Alliance. “While the headlines might focus on rising cases in Europe and the US, it is sadly still the case that the vast majority of measles deaths are happening in the world’s poorest countries, where poor health systems mean children are often left to fight the disease without treatment or support. That’s why these vaccination campaigns are so important, protecting the next generation so they can survive and thrive in later life. The use of tailored and targeted approaches in these campaigns is vital to ensure we leave no child behind.”

“Measles is a devastating disease that is causing severe sickness and taking lives,” said Dr Tedros Adhanom Ghebreyesus, Director-General of WHO. “No matter where they live, vaccination helps children survive, thrive, and lead a long and healthy life. WHO is proud to be working with Gavi and partners to ensure lifesaving measles vaccines reach where they are needed most.”

“Measles cases rose alarmingly in 2019, affecting hundreds of thousands of children and claiming many young lives,” said Henrietta Fore, UNICEF Executive Director. “We need to vaccinate every child. These measles outbreaks have taught us that we need to stay vigilant. We can’t afford to wait and watch.”

The vaccination campaigns will take place in the following countries:

The Vaccine Alliance also provides funding to the M&RI to support their work responding to measles outbreaks in developing countries. With Gavi's support, M&RI has vaccinated 54 million children during measles outbreaks alone between 2012 and 2018.

In June this year, the UK will host Gavi’s donor pledging conference in London, where donors will aim to raise at least US$7.4 billion to help vaccinate a further 300 million children against 18 diseases between 2021-25.

“Measles kills tens of thousands of children worldwide every year,” said UK International Development Secretary Alok Sharma. “Yet with vaccines these deaths are entirely preventable. I’m proud the UK will help vaccinate millions of children through Gavi’s campaigns, and will bring together donors in London in June to pledge even more support for future vaccinations.”