Peace, Progress and Public Health: Côte d'Ivoire on the road to recovery

Five years ago the Côte d’Ivoire was hit by a civil war that claimed thousands of lives and ravaged the nation’s healthcare system. Today, immunisation coverage is almost back up to its pre-war level. How has the country turned round its immunisation rates so quickly?

Abidjan, 8 December 2016 - In November 2010, voters in the West African nation of Côte d’Ivoire had reason to celebrate as they made their way to the polling stations.

Their country had been enjoying years of uninterrupted economic growth, child mortality was decreasing and immunisation rates were at a record high. Though there were still plenty of challenges to overcome, Côte d’Ivoire was steadily becoming wealthier and healthier.

The long-delayed presidential elections seemed like another important step forward, a way to unite the country following a brutal civil war that had ended six years earlier.

But this optimism quickly faded. The election result reignited tensions thought to have been laid to rest. The nation again descended into violence. Over the next four months the Second Ivorian Civil War would lead to the deaths of thousands of people with over a million people fleeing their homes. The country’s infrastructure lay in ruins.

This brief yet hugely destructive conflict had an immediate impact on routine immunisation. Coverage rates plummeted from 85% in 2010 to just 62% in 2011, leaving thousands of children unprotected from deadly diseases.

Dr Raymonde Goudou Coffie, Minister for Health and Public Hygiene, told Gavi: “As you can imagine, after the crisis our country experienced, if there was one sector that was the most affected by degraded infrastructure it was the health system.

“So, we had to double our efforts. Along with our partners, we were able to improve the supply chain very quickly as well as the cold chain. We were also able to get – and I thank Gavi very much – useful equipment, in this case motorcycles and cars, to help vaccinating agents reach all of the difficult to access areas of the country.”

Gavi waived some of its usual support requirements to help the country’s recovery and, in 2014, supported the introduction of pneumococcal and rotavirus vaccines, which tackle the two biggest childhood killers – pneumonia and diarrhoea.

A year late, with Gavi funding, the country was also able to complete a demonstration project for human papillomavirus (HPV) vaccine, which prevents cervical cancer. The demo achieved 98% coverage rates, paving the way for a nationwide introduction of this lifesaving vaccine in the coming years.

Daniel Ekra, Director Coordinator of Côte d’Ivoire’s Expanded Programme for Immunisation, said: “Gavi’s support has enabled us to have access to vaccines, new vaccines that are much more expensive. Also to have a supply chain with logistics that are efficient, allowing routine vaccinations throughout Côte d’Ivoire.”

This focus on routine immunisation has helped the country to rapidly improve its coverage rates, which are almost back to the high levels they reached in 2010. The five-in-one pentavalent vaccine – protecting against diphtheria, tetanus, pertussis, hepatitis B, Haemophilus influenzae type b (Hib) - now reaches 83% of children, with pneumococcal coverage at 72%. 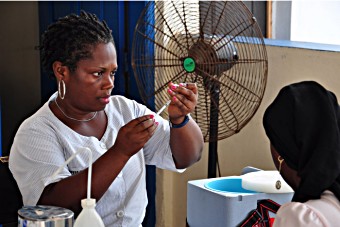 This is real progress, but Côte d’Ivoire still has some major hurdles to clear.

As well as ensuring vaccines reach even the hardest-to-reach communities and data quality issues, one key challenge remains convincing parents of the value of vaccinations.

“Because we are part of the community, access for us is easy,” said Community Adviser Virginie Anoma, “but there are times when we have difficulties because some parents are very reluctant and refuse vaccinations.”

Nina Seka, gave birth to her baby Tania one and a half months ago: “Word on the street was that needles made the children tired, it made the children sick. That is why I hesitated a little. But I became more aware and now it’s me who wants the vaccinations!”

“Reinforcing the cold chain is fundamental to making sure vaccines reach those who need them the most in the best possible condition,” said Dr Okonjo-Iweala.

The new centre holds 11 cold rooms in a new 800 square metre building. An emergency electricity generator has also been fitted to make sure blackouts don’t affect the effectiveness of the vaccines stored in the building.

Minister of Health Dr Goudou Coffie, speaking at the opening of the facility, said: “We are pleased for all the children of Côte d’Ivoire that all the recommended vaccines will be stored in the right way and available to local health centres. It’s an important day for the Côte d’Ivoire government. Vaccines save lives and contribute to the nation’s development by protecting the lifeblood of the country.”