New study shows that immunisation in the world’s poorest countries is set to save millions from one of the primary causes of extreme poverty: health expenses 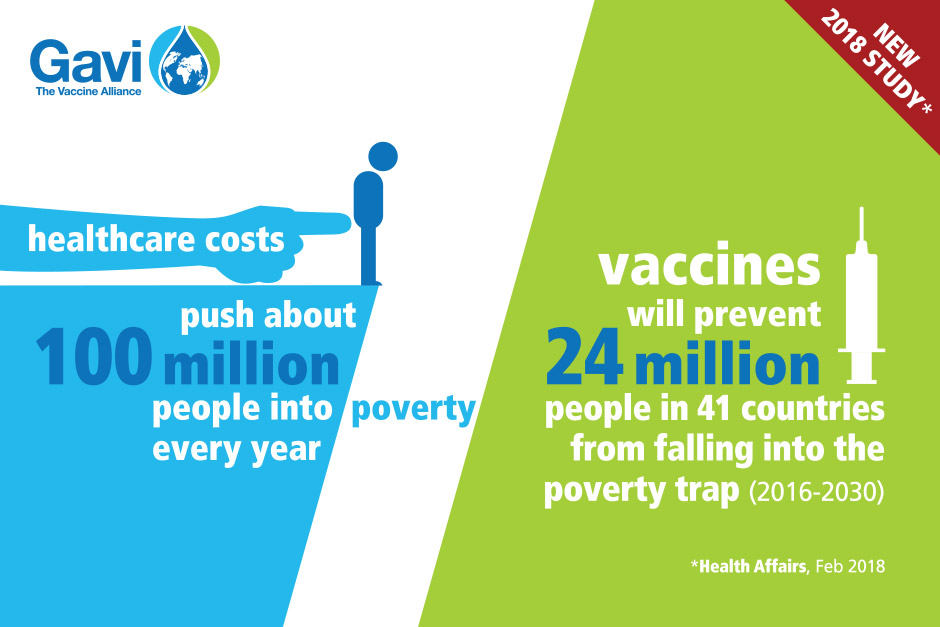 New study shows that immunisation in the world’s poorest countries is set to save millions from one of the primary causes of extreme poverty: health expenses

Geneva, 5 February 2018 – In addition to saving millions of lives, vaccines will help prevent 24 million people in some of the world’s poorest countries from slipping into poverty by 2030, according to a study published today in Health Affairs.

The Harvard study, co-authored by Gavi, the Vaccine Alliance and a wide range of partners, modelled the health and economic impact of vaccines for ten diseases in 41 developing countries. As well as the economic impact, the study also estimated that vaccines administered between 2016 and 2030 would prevent 36 million deaths.

“Vaccines don’t just save lives, they also have a huge economic impact on families, communities and economies,” said Dr Seth Berkley, CEO of Gavi, the Vaccine Alliance. “A healthy child is more likely to go to school and become a more productive member of society in later life, while their families can avoid the often crippling healthcare costs that diseases can bring. As this important study shows, this is enough to save millions of people from the misery of extreme poverty. To realise these figures we now need to redouble our efforts to ensure every child, no matter where they’re born, has access to lifesaving vaccines.”

Sudden healthcare expenses push about 100 million1 people into poverty every year, making medical impoverishment one of the main factors forcing families below the World Bank’s poverty line of less than US$ 1.90 per day.

Vaccines will have the greatest impact on reducing cases of poverty caused by hepatitis B, helping an estimated 14 million people avoid medical impoverishment. Cases of poverty caused by measles and meningitis A will also be significantly reduced by vaccines, with an estimated 5 million and 3 million cases averted respectively, while rotavirus is set to prevent 242,000 cases. Measles vaccine is estimated to prevent by far the highest number of deaths: 22 million of the 36 million total.

According to the study, the poorest 20 per cent of the population represented over a quarter of deaths prevented by vaccination. The researchers therefore concluded that the introduction of vaccines in the poorest regions will have the greatest impact on reducing both the number of deaths and the number of people forced into poverty by the cost of healthcare. The study underlines that sustained investments in vaccines could therefore make a large contribution toward achieving the Sustainable Development Goals and universal health coverage.

Gavi currently supports vaccine programmes in all 41 countries included in the study, which have a combined population of 1.52 billion. The countries were selected based on the availability of data from Demographic and Health Surveys. The researchers made their conclusions after estimating the distribution of vaccine-averted deaths for each disease and simulating monthly household income for each income group.

A 2016 study by Johns Hopkins University, also published in Health Affairs, found that for every US$ 1 spent on immunisation, US$ 16 is saved in healthcare costs, lost wages and lost productivity due to illness. Taking into account the broader benefits of people living longer, healthier lives, the return on investment rises to US$ 44 per US$ 1 spent.

1 The original version of the study published in Health Affairs on 5 February 2018 incorrectly referred to “150 million people" being pushed into poverty, rather than “100 million". This press release was subsequently updated on 7 February 2018.