First delivery of German-donated COVID vaccines to COVAX land in Mauritania, with other deliveries to follow 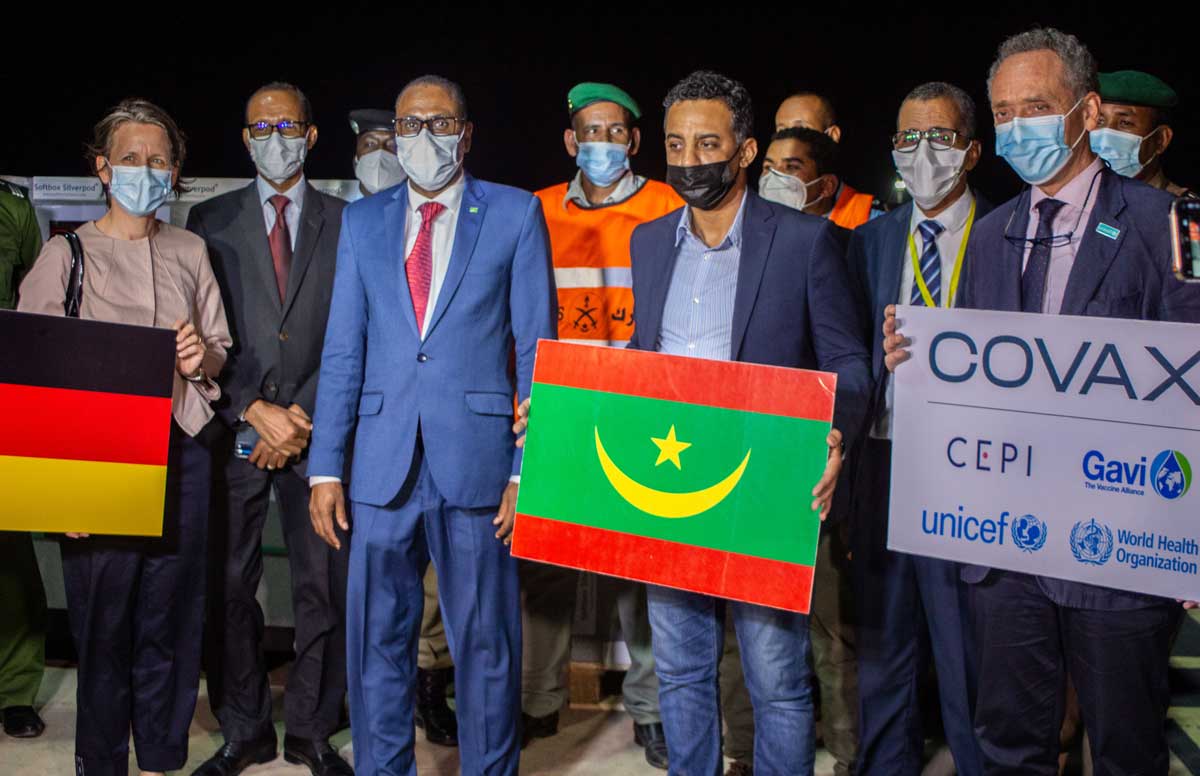 Geneva, 8 September 2021 – Building on its pledge of EUR 1.62 billion to COVAX, the German government has donated the first batch of its pledge of 100 million doses of COVID-19 vaccines, the majority of which will be delivered via COVAX. The first deliveries of AstraZeneca vaccines from this donation land today in Mauritania (213,600 doses), with the next tranches set to arrive in Tajikistan (100,800 doses) on 9 September, Uzbekistan (356,000 doses) on 10 September, Sudan (357,600 doses) on 11 September and Ethiopia (271,200 doses) on 13 September. These will be later followed by a second allocation of doses that will include Botswana (101,760 doses) and Namibia (117,120 doses), among other countries.

Germany’s significant dose-sharing commitment comes alongside strong financial support to COVAX and significant additional funding pledged to the Access to COVID-19 Tools (ACT) Accelerator. With the total funding of nearly EUR 2.2 billion, Germany is the second largest donor to the ACT-Accelerator. Alongside support for the Gavi COVAX AMC, German funding contributes to the reinforcement of diagnostics, therapeutics and health systems to combat COVID-19 around the world – because no-one is safe until everyone is safe. This dose donation by Germany allows COVAX to deliver more vaccines in the third quarter of this year, before supply from COVAX purchase agreements increases in Q4, meaning that more people will be able to access vaccines now, at a time when variants are a major threat to global health and stability.

“Germany has been a major supporter of COVAX and a true leader in global health, having pledged both significant funding and vaccine doses. We are thankful to Germany for sharing the responsibility of ending the acute stage of the pandemic through the conversion of these pledges into deliveries,” said Dr Seth Berkley, CEO of Gavi, the Vaccine Alliance, which leads on procurement and delivery at scale for COVAX. “This dose donation enables COVAX to reach some of those most in need of protection, and we are grateful to the German government and the German people for their continued support.”

Chancellor Angela Merkel stressed: “COVAX is the most important multilateral initiative for ensuring equitable access to and distribution of COVID-19 vaccines. I am therefore delighted that today COVAX can start supplying the first 1.3 million German vaccine doses to the countries that currently need them most, with many more to follow in the weeks ahead.”

These doses donated by Germany are produced by the AstraZeneca manufacturing network. Donating through COVAX helps to increase vaccine coverage, ensures that no dose goes to waste, and helps to bring an end to the acute phase of the pandemic. The design and operationalization of the COVAX dose sharing mechanism is being supported by a contribution of CAD 5 million from Canada.

The donation of doses via COVAX are enabled via tripartite agreements between Gavi, manufacturers, and donating countries. The shipments to countries will be enabled by COVAX delivery partners UNICEF and the Pan American Health Organisation (PAHO).

Over 600 million doses have already been pledged to COVAX by a number of countries in response to short-term supply challenges and the rise of new variants. Working with donor governments to operationalise growing numbers of dose-sharing pledges, COVAX expects to see more deliveries of donated doses in the weeks and months to come.

COVAX, the vaccines pillar of the Access to COVID-19 Tools (ACT) Accelerator , is co-led by CEPI, Gavi and WHO – working in partnership with developed and developing country vaccine manufacturers, UNICEF, PAHO, the World Bank, and others. It is the only global initiative that is working with governments and manufacturers to ensure COVID-19 vaccines are available worldwide to both high-income and lower-income countries.

Gavi leads on procurement and delivery at scale for COVAX: designing and managing the COVAX Facility and the Gavi COVAX AMC and working with its traditional Alliance partners UNICEF and WHO, along with governments, on country readiness and delivery. As part of this role, Gavi hosts the Office of the COVAX Facility to coordinate the operation and governance of the mechanism as a whole, holds financial and legal relationships with 193 Facility participants, and manages the COVAX Facility deals portfolio: negotiating advance purchase agreements with manufacturers of promising vaccine candidates to secure doses on behalf of all COVAX Facility participants. Gavi also coordinates design, operationalisation and fundraising for the Gavi COVAX AMC, the mechanism that provides access to donor-funded doses of vaccine to 92 lower-income economies. As part of this work, Gavi provides funding and oversight for UNICEF procurement and delivery of vaccines to all AMC participants – operationalising the advance purchase agreements between Gavi and manufacturers – as well as support for partners’ and governments work on readiness and delivery. This includes tailored support to governments, UNICEF, WHO and other partners for cold chain equipment, technical assistance, syringes, vehicles, and other aspects of the vastly complex logistical operation for delivery. Gavi also co-designed, raises funds for and supports the operationalisation of the AMC’s no-fault compensation mechanism as well as the COVAX Humanitarian Buffer.